“Answer IV is the crown jewel of Iverson’s journey and the cultural shift he helped to lead,” recalls veteran Reebok Footwear Designer Xavier Jones. “By his ’00-’01 season, ‘Chuck’ was already so beloved for his style and how he approached the game, but that year truly cemented A.I. as a cultural icon. On his feet, Answer IV became a symbol for the new era of modern athlete and a celebration of self-expression. It is without a doubt one of the most iconic sneakers to ever grace the hardwood.”

In Fall 2000, ahead of Iverson’s fifth season and in the heart of his meteoric pro basketball rise, Reebok brought to the table a brand new sneaker that would seamlessly “Answer” the demands of A.I.’s on-court energy and defiant off-court style. While this fourth instalment of Iverson’s signature Reebok “Answer” series carried forward a number of key design elements like DMX cushioning, the Answer IV was a true divergence from the pack. With its wave-like upper, “I3” racing-inspired sidewalls, distinct high-contrast color blocking and zipper shroud, like many of Reebok’s bold basketball sneakers of the era, the Answer IV could not be missed – neither could A.I.

What many do not know is that when Reebok first released the shoe in 2000, Iverson – its most important stress tester – found that the zipper would undo itself during action, opening the shroud and exposing the foot. While the issue complimented A.I.’s laid back look, the “malfunction” ultimately compromised the sneaker’s in-game function. Thus, Reebok would soon add the Velcro strap found on later models, for added security.

Leap forward to the 20th Anniversary reissue today where OG fans will appreciate original design elements like the fading gradient “I3” logo cascading down the tongue veiled by the zipper shroud, 3M reflective details returning to the “I3” quarter panels and top of tongue, the original eye-catching upper and a dynamic outsole featuring DMX foam, a TPU bridge plate and tactical tread patterns. The outsole is complemented by OG graphic executions like the Iverson head sunken underfoot, engraved “Only The Strong Survive” tagline and “I3” and Vector logos at the bridge and forefoot.

While Answer IV continues to play a critical role in carrying forward Reebok’s hoops heritage and the legacy of Allen Iverson, the against-the-grain design is equally ideal for rising ballers today looking to pave their own path.

In honor of the 20th Anniversary launch, Reebok has partnered with rising sports illustrator Peter Richter (aka Floppy Action) to design and issue a limited run of 199 serial-numbered commemorative “Answer-Versary” trading cards paying homage to the iconic sneaker and Iverson’s 2000-2001 MVP season. Of the 199 commemorative cards to be released: 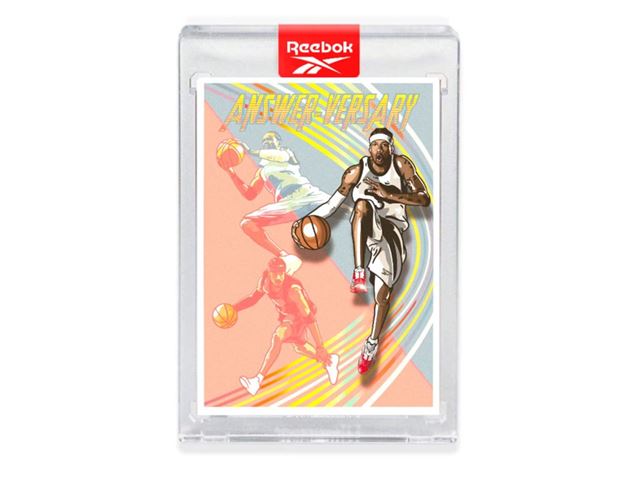 More About Reebok’s DMX Cushioning Technology: A product of Reebok’s Advanced Concepts division formed in the mid 1980s, DMX  (short for Dynamax) featured a series of interlinked air chambers under the foot that, thanks to the motion of the wearer’s stride, would fill and empty with air accordingly. If the wearer’s foot movement indicated that air was needed in a specific portion of the shoe, pressure would cause air to fill the corresponding chamber. This movement of air helped deliver new levels of comfort, cushioning and stability. The technology was suited for running, training, walking and basketball, but it really shone in the DMX Run 10 model in 1997. That same year, the original Answer  basketball sneaker was released in time for Christmas, marking the beginning of an iconic line of shoes that thrived until 2014. As Reebok’s first basketball shoe to include DMX technology, commercials for the Answer emphasized how the new technology helped Iverson pull off his classic moves like the crossover. The effects of the DMX technology were so natural that Iverson said, “It’s like I don’t even think about it.”