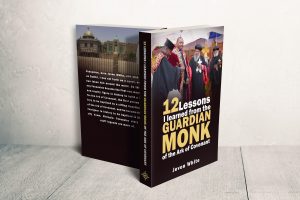 There was more in-store than just a trip to Ethiopia for author, Jevon White. He opens up in 142 pages about lessons he learned from the sitting Guardian Monk, and building the new temple for the Holy Ark.

White‘s book is a chronicle of his journey to Ethiopia and his chance encounter with the Guardian Monk of the Ark of the Covenant, who became a mentor and father-figure. He taught White among other things, the 12 lessons recorded in his new book. On the voyage, his baptism, and experiences with the Monk, introduce him to a “higher understanding of his calling and who he is,” he says.

Equally significant, White was entrusted the task of building a new temple for the Holy Ark. This traditionally has been an assignment carried out by kings and queens.

Born on the Caribbean Island of Montserrat, White immigrated to the United States and settled in Boston. He attended Morehouse College in Atlanta, Georgia. Following which, White discovered the RasTafari faith. Driven by a deep desire to pray at the site of the Ark of the Covenant and be closer to God, he set forth on a pilgrimage to Axum, Ethiopia, where, by a stroke of divine intervention, had the rare privilege of meeting the monk who guards the Ark of the Covenant.

With his name firmly cemented in the annals of history, White shares his unforgettable experience in hopes that others might also benefit.

Says White of the experience: “I was very fortunate to be in the presence of the Guardian Monk of the Ark of the Covenant. He’s a person who’s difficult to meet, much less to have an audience with, much less to have as a mentor. He’s taught me many things. Things that could also be of value to others. I’m sharing with the world, some of the lessons that he has taught me.”

The 12 Lessons I Learned from the Guardian Monk of the Ark of Covenant is available digitally and on paperback at Amazon. For more information on Jevon White visit jevonwhite.com .

Tags: 12 Lessons I Learned from the Guardian Monk of the Ark of the Covenant, Author Jevon White