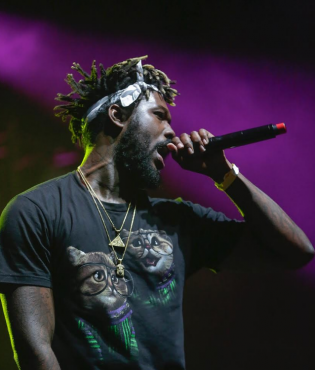 New York, NY – September 26, 2016 — Corey McGinnis, better known as “PHOR” from  VH1’s  Black Ink Crew Chicago is gearing up for the release of exclusive, new music and the second season of the show premiering this October. PHOR has recently signed to Devyne Stephen’s Upfront Entertainment for a label and production deal. “PHOR is a diverse kind of artist that can transcend across both TV and music. Our label is excited to work with him as he has some exciting things on the horizon,” says Stephens.  Stephens is best known for discovering AKON and having a hand in the development and production of such acts like R. Kelly, Monica, Pink, TLC, Toni Braxton and others.  PHOR’s recently released, hit single “Do It” from his sophomore album Lightning Bug is now available on iTunes and Spotify.

The Chicago-based rapper/songwriter became a household name through his breakout role on Black Ink Crew Chicago where he showcased his skills as a tattoo artist and musician.  Through the show, fans have been able to connect with Phor’s music and get the inside scoop of his creative process. His fanbase has continued to skyrocket with his songs playing throughout various episodes.

While maintaining a presence on major music sites, Phor has played on renowned stages such as SXSW, Atlanta’s A3C Festival and many more.

As Phor continues to travel the country promoting Lightning Bug, be sure to tune in to VH1 for the season premiere of Black Ink Crew Chicago on October 3 @ 9PM EST/8 PM CST to follow his journey as a tattoo artist breaking the mold of the rap music industry.