The buildup to this movie has been at a high volume due to the success of the original Black Panther movie by Marvel Studios which debuted in 2018. As the movie grossed over $1.3 billion worldwide, it became the highest-grossing film directed by a Black filmmaker. Ryan Coogler returned to direct the much-anticipated sequel. Of course, the actor who carried the movie, Chadwick Boseman, who played the role of the lead character, T’Challa aka Black Panther, passed away after losing a battle with colon cancer in 2020. The thought of Boseman not being in the sequel had many people concerned with how the filming and the plotline of the movie would be, but, I can safely assure you that a great job was done by Coogler and the studio.

As the citizens of Wakanda mourn the loss of its king, an unexpected threat emerges that can ruin Wakanda. An underwater city, Tlālōcān led by a very powerful and unrelenting warrior named Namor (played by Tenoch Huerta) aims its sights on destroying Princess Shuri and the whole kingdom of Wakanda. As Namor promises to end the African nation, Queen Ramonda (Angela Bassett), Nakia (Lupita Nyong’o), and Shuri have to find a way to prevent that from taking place against a very formidable foe who seems to be indestructible.

The graphics and camera work in Black Panther: Wakanda Forever doesn’t disappoint as the action scenes were vibrantly filmed through various locales and the underwater action was truly amazing to watch. Having been invited to experience the sequel in a Dolby Cinema theater which gives the movie a better listening and viewing background, made watching the film much better. The sounds, thanks to Dolby Atmos, literally surrounded the audience members as we were made to feel as if we were right there in Wakanda. As the underwater scenes were being watched, I felt like I was also swimming along with the natives of the underwater city.

I’d definitely recommend spending your money to see this movie and I will assure you that you won’t be disappointed with the direction and cinematography. You must make sure you stay after the credits are done as well as you will be hit with a surprise that no one anticipated that I won’t reveal here.

And I have a confession to make that will probably get me vilified. For the few people who may not have viewed the first Black Panther, don’t worry, although you may not know the backstory, the movie was done in such a way that you don’t have to know in order to be engulfed in Wakanda Forever. I know this because I have yet to view Black Panther and did not feel lost at all throughout the movie. 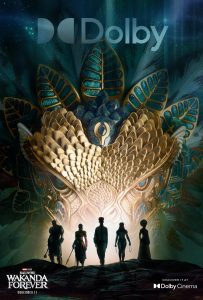