Skip to content
for colored girls who have considered suicide/
when the rainbow is enuf
EXTENDS TWO ADDITIONAL WEEKS
AFTER ANNOUNCING THE SHOW MUST CLOSE,
THE MOST TONY NOMINATED PLAY CURRENTLY ON BROADWAY
WILL NOW PLAY THROUGH SUNDAY, JUNE 5 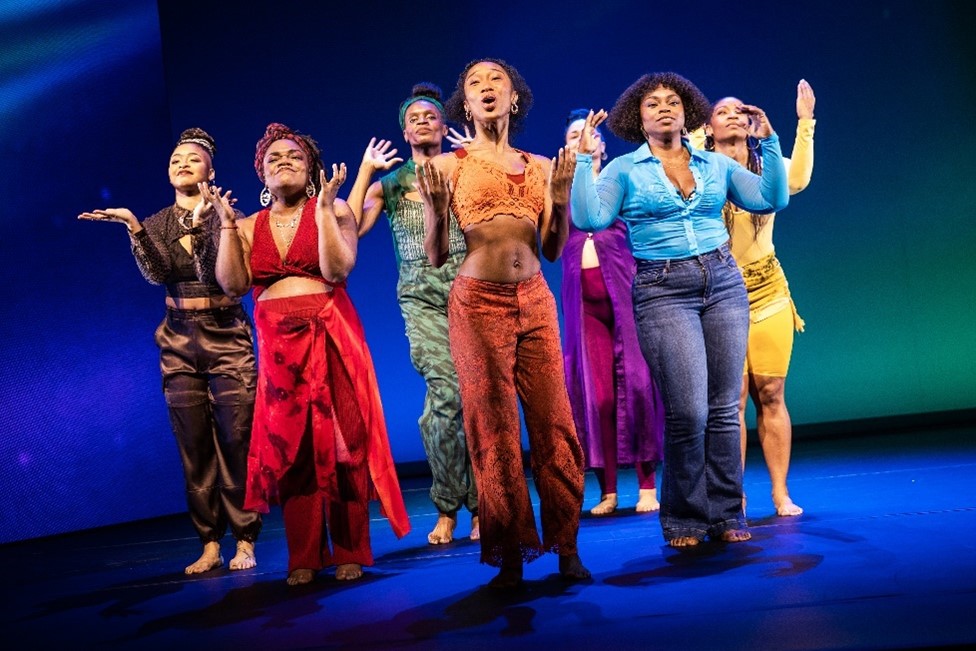 NOMINATED FOR 7 TONY AWARDS INCLUDING BEST REVIVAL
3 DRAMA LEAGUE AWARDS
3 OUTER CRITICS CIRCLE AWARDS
AT BROADWAY’S BOOTH THEATRE
DIRECTED AND CHOREOGRAPHED
BY DOUBLE TONY NOMINEE CAMILLE A. BROWN
Starring
AMARA GRANDERSON, TENDAYI KUUMBA, KENITA R. MILLER, OKWUI OKPOKWASILI, STACEY SARGEANT, ALEXANDRIA WAILES, D. WOODS
NEW YORK, NY – Following an earlier announcement that the show must close, the most Tony nominated play currently on Broadway, the critically acclaimed and reimagined revival of Ntozake Shange’s groundbreaking for colored girls who have considered suicide/ when the rainbow is enuf, will now play an additional two weeks through Sunday, June 5 at Broadway’s Booth Theatre (222 West 45th Street). The previously announced final performance was Sunday, May 22.
The celebrated production received seven Tony nominations, including Best Revival and a historic double nomination for Best Direction of a Play and Best Choreography for Tony Nominee Camille A. Brown, the first person to receive both nominations for the same play. Kenita R. Miller received a nomination for Best Performance by an Actress in a Featured Role in a Play, Sarafina Bush received a nomination for Best Costume Design of a Play, Jiyoun Chang received a nomination for Best Lighting Design of a Play and Justin Ellington received a nomination for Best Sound Design of a Play.
A galvanizing campaign across social media has also erupted to support not only an extension of the run, but to sponsor female-identifying people of color with a pair of gifted tickets, to ensure an opportunity to experience this production.
Tickets are on sale for the show’s final weeks at www.telecharge.com. Discounted tickets are now available to students who present a valid Student ID at $25 per ticket. To gift tickets to female-identifying women of color, visit the following the landing page linked here.
for colored girls… is Camille A. Brown’s directorial debut on Broadway. She is the first Black woman to serve as both director and choreographer on Broadway in more than 65 years, bringing a reinvented, joyful and celebratory production of Shange’s seminal work back to its original home at the Booth Theatre, where the play premiered in 1976.
for colored girls… has received three Drama League Award nominations including Outstanding Revival of a Play, Outstanding Direction of a Play – Camille A. Brown and Distinguished Performance Award – Kenita R. Miller. The production has also received three Outer Critics Circle Award nominations including Outstanding Revival of a Play, Outstanding Director of a Play – Camille A. Brown and Outstanding Choreography – Camille A. Brown.
CRITIC’S PICK!
“Triumphant, thrilling, and exuberant! A Broadway celebration you will not want to miss. Director-choreographer Camille A. Brown’s sublime revival breathes warm, kinetic life into Ntozake Shange’s Broadway landmark.”
Laura Collins-Hughes, The New York Times
“Riveting and otherworldly! It’s impossible to look away.”
Ayanna Prescod, Variety
“A joy to witness! A genre-defying work!”
Lovia Gyarkye, The Hollywood Reporter
“Black Girl fierceness, fire and fury! This play is a blessing.”
Linda Armstrong, Amsterdam News
“An energy-filled, life-imparting show to watch!”
Tim Teeman, The Daily Beast
“Triumphant and ferociously comic!”
Melissa Rose Bernardo, Time Out
“A rich and vibrant masterwork! This spectacular American piece of writing now reaches a new generation.”
Chris Jones, New York Daily News
“The kind of visceral theatrical piece that should be experienced live.”
Matt Windman, amNY
“From African influence to HBCU stepping, Brown’s choreography is a forensic amalgamation of styles that shows all forms of Black dance should be considered tribal in origin,” described Matthew Allen of The Grio.
“Brown’s staging is so attuned to the words and cadences of Shange’s choreopoem, yet so confident in its own interpretive vision, that the characters blossom into their full vibrancy,” praised Laura Collins-Hughes of The New York Times.
Join the circle as seven women share their stories and find strength in each other’s humor and passion through a fusion of music, dance, poetry and song that explodes off the stage and resonates with all. It’s time for joy. It’s time for sisterhood. It’s time for colored girls.
The cast stars Amara Granderson as Lady in Orange, Tendayi Kuumba as Lady in Brown, Kenita R. Miller as Lady in Red, Okwui Okpokwasili as Lady in Green, Stacey Sargeant as Lady in Blue, Alexandria Wailes as Lady in Purple, and D. Woods as Lady in Yellow. Rachel Christopher, Treshelle Edmond, McKenzie Frye, Kala Ross and Alexis Sims join the company as standbys and understudies.
for colored girls… features set design by Myung Hee Cho, costume design by Sarafina Bush, lighting design by Jiyoun Chang, sound design by Justin Ellington, projection design by Aaron Rhyne, and hair & wig design by Cookie Jordan. The show features original music by Martha Redbone and Aaron Whitby. Deah Love Harriott serves as the Music Director and Tia Allen is the Music Coordinator. The Production Stage Manager is Bernita Robinson and the Assistant Stage Manager is lark hackshaw. The production features casting by Erica Jensen/Calleri Jensen Davis and production supervision by Hudson Theatricals. Christina Franklin serves as the Associate Director and Maleek Washington and Mayte Natalio serve as Associate Choreographers.
Black girl magic is reborn. Ntozake Shange’s for colored girls who have considered suicide/ when the rainbow is enuf is the “landmark of American theater” (The New York Times) that blazed a trail for generations to come. Now, this celebration of the power of Black womanhood returns to Broadway for the first time, reinvented, directed, and choreographed by “a true superstar of theater and dance” (NPR), Tony AwardÒ nominee Camille A. Brown. And her vision is as fearlessly new as it is fiercely now.
For more information, visit www.forcoloredgirlsbway.com.
Follow on Facebook, Instagram and Twitter for updates.