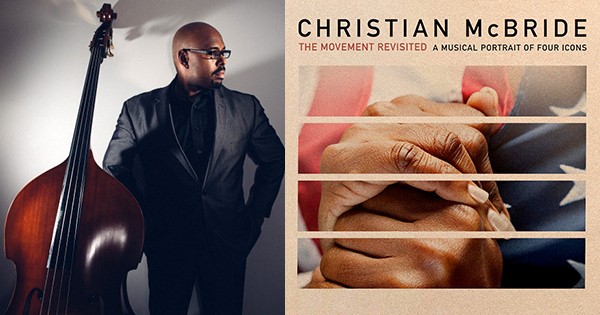 Marshaling his ever-sharpening skills as a composer, arranger, conductor, musician and lyricist, McBride created a historically and culturally illuminating five-part suite for an 18-piece big band, chorus, and narrators that places the motivating forces as well as the goals of the Civil Rights Movement within a powerfully relevant artistic context.

“The movement was obviously much bigger than the four historic figures I included,” Christian notes. “But these four icons are people who touched me deeply, therefore I decided to put the tagline ‘A Musical Portrait of Four Icons’ as opposed to calling it a portrait of the Civil Rights Movement.”

McBride personally handpicked the four narrators for The Movement Revisited. “Each needed to possess the empathy, humor, and gravitas to bring the words of these civil rights legends to life, especially for a new, younger audience. In many ways, there are some new battles we’re fighting, but I feel that these new battles fall under the umbrella of equality, fairness and human rights – and that’s an old battle,” says Christian. For the voice of Rosa Parks, Sonia Sanchez, the great poet, author, and artist. To portray Rev. Dr. Martin Luther King Jr., the great character actor Wendell Pierce (The Wire, Treme), who possessed the stirring presence and ringing tones necessary for the role. Two other great actors, Vondie Curtis-Hall (Chicago Hope, Daredevil) and Dion Graham (Malcolm X, The Wire) were recruited to embody Malcolm X and Muhammad Ali, respectively.

Born in Philadelphia, McBride is a gifted musical prodigy who soaked up influences from every direction. At the tender age of 17, he was recruited by saxophonist Bobby Watson to join his group, Horizon. During the 1990s, he proceeded to work with some of the biggest names in jazz, including Pat Metheny, Wynton Marsalis, Freddie Hubbard, and Chick Corea as well as major pop and rock stars like Sting, Paul McCartney, James Brown and Celine Dion. His abilities were also coveted by the classical music world, including opera legends Kathleen Battle and Renee Fleming. He is also a respected educator and advocate, first noted in 1997 when he spoke on former President Bill Clinton’s town hall meeting “Racism in the Performing Arts.” He has since been named Artistic Director of the Jazz Aspen Snowmass Summer Sessions (2000), co-director of the National Jazz Museum in Harlem (2005), and the Second Creative Chair for Jazz of the Los Angeles Philharmonic Association (2005).

McBride states, “What’s going on with our society right now is that we’re picking up the struggle over civil rights – human rights, really – where we left off at an earlier time in our culture, while also fighting some new battles. So, if The Movement Revisited can propel awareness of not just today’s issues, but our history, while pleasing people musically, then it has done its job.”