Earlier this year, BLACK ENTERPRISE reported the seemingly happy marriage between actors Tia Mowry and her husband, Cory Hardrict. They had recently celebrated their 14th anniversary as the couple shared pcitures of themselves on their Instagram page according to Bol News. This was in April.

Fast forward to October and it has been reported that Mowry just filed for divorce from Hardrict.

As news traveled quickly of the pending divorce, fans have already started speculating the cause of the marriage crumbling. In a recent post on his Instagram page, the All American: Homecoming actor responded to allegations of him cheating on the Sister, Sister star.

Based on a screenshot shared by People, an Instagram user left a comment on Hardtict’s latest post in reference to the divorce news from his future ex-wife.

To which Hardtricty directly responds to her comment: “Lies!”

Another user then says to Hardtrict: “glad you responded. People are making stuff up.
Praying for you both.”

A different poster then says: “people just like to make things up just to get some attention.” 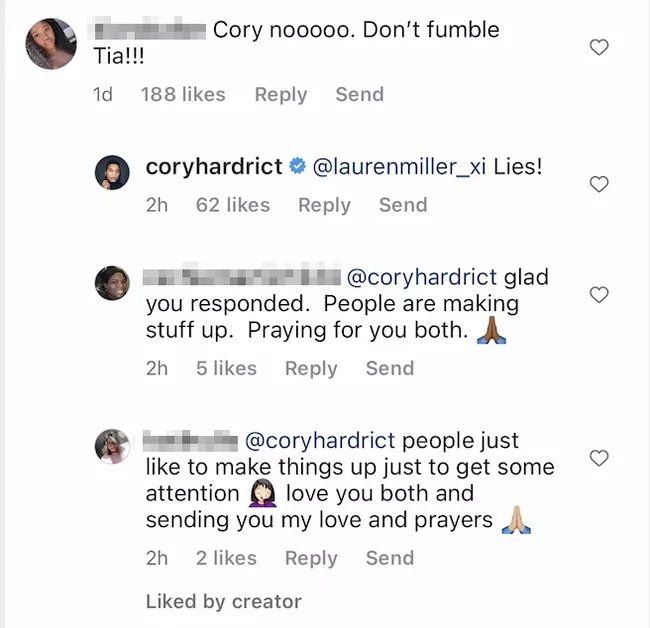 Earlier this week, Mowry filed the divorce papers in Los Angeles citing irreconcilable differences, TMZ reported. In her filing, she didn’t specify an actual date of separation but did request joint physical and legal custody of their two children.

Mowry also requested that the judge not allow any spousal support for either party as they both signed a prenuptial agreement.

According to Essence, the two actors got married back in 2008 in Santa Barbara at the Biltmore Hotel, and they have two children, their son Cree, 11, and daughter Cairo, 4.

The tide has definitely turned since earlier this year when Mowry captioned a photo celebrating the couple’s recent anniversary.

“I can’t believe it’s been 13 years of marriage, 21 years together. Better yet, this union produced 2 beautiful children @creehardrict and #cairo. I am so blessed to call you my #husband.”

“I am so #blessed to go through this thing called life with you. You are my biggest supporter and often believed in me when I didn’t believe in myself. I am forever grateful #God has us in his hands.”