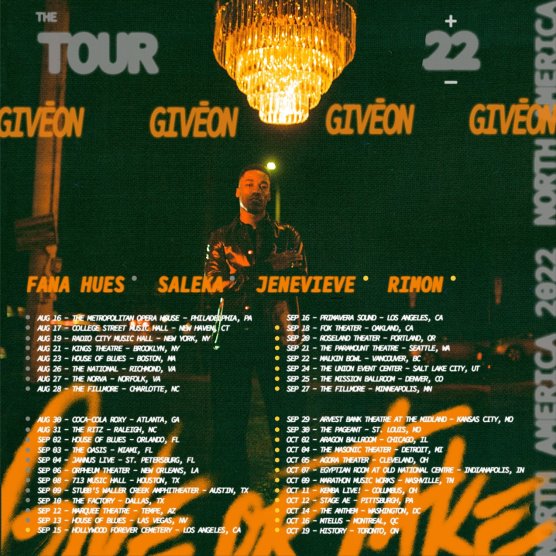 Known for his unforgettable live performances, this tour promises to be his boldest, brightest, and best yet—and it will sell out!

It will notably be his first tour in support of his anxiously awaited full-length debut album, Give Or Take, arriving on June 24, 2022 via Not So Fast/Epic Records. It is available for pre-order/pre-save HERE.

He heralded Give Or Take with the ballad “Lie Again.” It has already amassed over 8.9 million Spotify streams and 4.4 million YouTube views on the music video. Right out of the gate, Rolling Stone hailed it as “beautifully painful,” and Complex proclaimed, “He shows his strength in vocals as he asks his partner to lie to him about past indiscretions.”

Last September, GIVĒON shared “For Tonight,” the lead single off his forthcoming debut LP which is now RIAA certified Gold. The song was praised by outlets such as Complex and Rolling Stone on its way to amassing more than 175 million streams worldwide. Earlier this month, GIVĒON released a live version of “For Tonight” as part of the VEVO LIFT performance series. That followed his appearance at the 64th Annual Grammy Awards where GIVĒON joined Justin Bieber and Daniel Caesar for a smooth, jam session-style performance of their chart-topping hit “Peaches.”

GIVĒON also just concluded his sold-out European tour titled “FROM THE FIVE SIX TWO” with dates in Amsterdam, Germany, France and Spain and will be headed back across the pond to perform at Wireless Festival in London on July 8th. With “For Tonight” and “Lie Again” GIVĒON offers another tantalizing taste of those shows and his debut album, further cementing his status as one of modern R&B’s great storytellers.

ABOUT GIVĒON
GIVĒON has made himself one of music’s brightest stars by bringing vivid color, depth, and soul to songs that capture the intensity of life’s twists and turns. After coming to fame via Drake’s “Chicago Freestyle,” the CA native became a force in his own right. GIVĒON had a whirlwind 2020 after releasing his Platinum-certified “Like I Want You” (225 million cross-platform streams in the US). He kept the momentum with “Heartbreak Anniversary,” a gauzy ballad that peaked at #16 on the Billboard Hot 100, garnered over 951 million worldwide streams, and earned 2X Platinum status. In March 2020, GIVĒON’s debut EP, Take Time, confirmed his evocative songwriting prowess and would be nominated for Best R&B Album at the 2021 Grammys. His fall When It’s All Said and Done EP further explored the peaks and valleys of love and, when re-packaged with its predecessor in 2021, hit #5 on the Billboard 200. After being nominated for a 2020 NAACP Image Award for Outstanding New Artist, he won BET’s 2021 Best New Artist, and his audience is growing—to the tune of over 1.7 billion streams globally. He even hit #1 on the Hot 100 in March on Justin Bieber’s “Peaches.” That hit helped him win the award for Best Pop Song at the 2021 MTV VMA‘s where he was nominated for seven awards including Best New Artist, Best R&B and Best Pop Song. Drake then invited GIVĒON back into his world, this time for a sizzling verse on Certified Lover Boy’s “In the Bible” with Lil Durk—one of a guaranteed run of thrilling collabs to come. And at his festival debut, Lollapalooza 2021, he found a sea of voices who knew his lyrics. But success has never really been a goal— GIVĒON just wants to bear his soul.