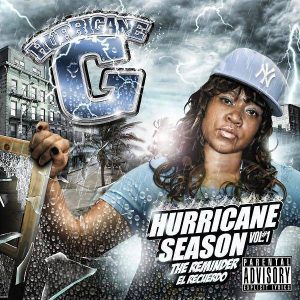 Hurricane G died on November 6, 2022 at the age of 52. While her official cause of death has not been released, her daughter “Lexus” (whom she shares with Eric Sermon) announced this passed May, that her mother was diagnosed with lung cancer.

She was born “Gloria Rodriguez” and is from the Flatbush section of Brooklyn, NY. Her music career began in 1992 as Hit Squad‘s first female member. Hurricane G was also a featured rapper on projects by Redman, Keith Murray, Xzibit, Funk Doobiest, Delinquent Habits, Cocoa Brovaz, and Puff Daddy to name a few.

The boriqua spitter released her bebut solo album, All Woman, in 1997. She later released a joint album with Thirstin Howell entitled, Mami & Papi.

Wideley known for weaving spanish and english verses together, Hurricane G’s unique, bilingual flow has not been duplicated.  Her unforgettable voice and gritty lyrics are enconced in Hip-Hop history, and she will be remembered.

END_OF_DOCUMENT_TOKEN_TO_BE_REPLACED

No Discipline Planned for T.J. Holmes and Amy Robach From Good Morning America Executives For Romance