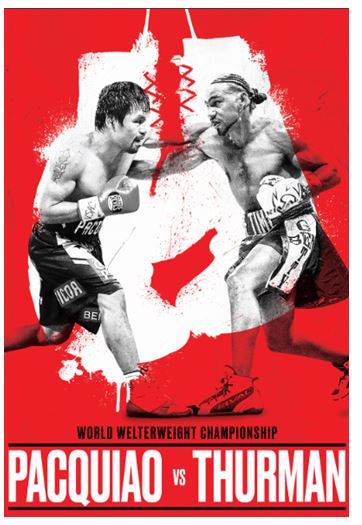 Eight-Division World Champion Manny Pacquiao
Faces Unbeaten Champ Keith Thurman in
Welterweight World Title Fight Broadcast Live to
Cinemas Nationwide
Fathom Events, Premier Boxing Champions and FOX Sports Present a Blockbuster
Night Live from the MGM Grand Garden Arena in Las Vegas on Saturday, July 20
DENVER – June 26, 2019 – Boxing’s only eight-division world champion, Philippine Senator and regular WBA welterweight champion Manny “Pac Man” Pacquiao returns to face undefeated Super WBA Welterweight World Champion Keith “One Time” Thurman in a powerhouse 147-pound showdown broadcast live on Saturday, July 20 from the MGM Grand Garden Arena in Las Vegas. With his speed, power and tremendous boxing skills, Thurman represents the most dangerous challenger that the future Hall of Famer Pacquiao has faced in recent bouts. This high-stakes match will firmly give the winner a claim for the top spot in one of boxing’s deepest and most talented divisions.
Tickets for “Pacquiao vs. Thurman” can be purchased online at www.FathomEvents.com or at participating theater box offices now.
The live broadcast of “Pacquiao vs. Thurman” presented by Fathom Events, Premier Boxing Champions and FOX Sports is set for Saturday, July 20 beginning at 9:00 p.m. ET / 8:00 p.m. CT / 7:00 p.m. MT / 6:00 p.m. PT / 5:00 p.m. AK / 3:00 p.m. HI. Boxing fans throughout the U.S. will be able to enjoy the event in more than 175 select movie theaters through Fathom’s Digital Broadcast Network (DBN). A complete list of theater locations is available on the Fathom Events website (theaters and participants are subject to change).
A three-time Fighter of the Year and the Boxing Writers Association of America’s reigning Fighter of the Decade, Pacquiao (60-7-2, 39 KOs), who hails from Sarangani Province in the Philippines, is the only sitting Congressman and Senator to win a world title. Pacquiao’s boxing resume features victories over at least seven current and future Hall of Famers, including Oscar De La Hoya, Ricky Hatton, Marco Antonio Barrera, Erik Morales, Miguel Cotto, Shane Mosley and Juan Manuel Marquez.
In his last match on January 19, Pacquiao put on a vintage performance against four-division champion Adrien Broner, scoring a 12-round unanimous decision in the 70th match of his illustrious career. It was his first time fighting in the U.S. in two years. Before that, he scored an impressive knockout over Lucas Matthysse to win his version of the WBA welterweight championship in Malaysia last July 15.
The 30-year-old Thurman (29-0, 22 KOs) is the longest reigning welterweight champion in boxing, having collected his WBA title with a stoppage victory over Diego Chaves in 2013. He has successfully defended that title eight times and became a unified welterweight champion when he defeated Danny Garcia by split decision to win the WBC title. Thurman was out of action for nearly two years due to injuries before getting back into the ring with a hard-fought victory against Josesito Lopez in January.  His power punching earned him the nickname “One Time.”
“Fight fans coast-to-coast were thrilled to watch Pacquiao’s victory over Broner live and larger-than-life in their local cinemas in January,” said Ray Nutt, Fathom Events CEO. “We’re pleased to partner again with our friends at FOX Sports and Premier Boxing Champions to bring another of Pac Man’s highly-anticipated bouts to the big screen.”
About Fathom Events
Fathom Events is the leading event cinema distributor with theater locations in all top 100 DMAs® (Designated Market Areas) and ranks as one of the largest overall theater content distributors. Owned by AMC Entertainment Inc. (NYSE: AMC); Cinemark Holdings, Inc. (NYSE: CNK); and Regal, a subsidiary of the Cineworld Group (LSE: CINE.L), Fathom Events offers a variety of unique entertainment events in movie theaters such as live performances of the Metropolitan Opera, top Broadway stage productions, major sporting events, epic concerts, the yearlong TCM Big Screen Classics series, inspirational events and popular anime franchises. Fathom Events takes audiences behind the scenes for unique extras including audience Q&As, backstage footage and interviews with cast and crew, creating the ultimate VIP experience. Fathom Events’ live Digital Broadcast Network (“DBN”) is the largest cinema broadcast network in North America, bringing live and pre-recorded events to 975 locations and 1,578 screens in 181 DMAs. The company also provides corporations a compelling national footprint for hosting employee meetings, customer rewards events and new product launches. For more information, visit www.FathomEvents.com.
About FOX Sports
FOX Sports is the umbrella entity representing 21st Century Fox’s wide array of multi-platform US-based sports assets.  Built with brands capable of reaching more than 100 million viewers in a single weekend, FOX Sports includes ownership and interests in linear television networks, digital and mobile programming, broadband platforms, multiple web sites, joint-venture businesses and several licensing relationships.  FOX Sports includes the sports television arm of the FOX Broadcasting Company; FS1, FS2; FOX Sports Regional Networks, their affiliated regional web sites and national programming; FOX Soccer Plus; FOX Deportes and FOX College Sports. FOX Sports also encompasses FOX Sports Digital, which includes FOXSports.com, FOX Sports App and FOX Sports GO.  Also included in the Group are FOX’s interests in joint-venture businesses Big Ten Network and BTN 2Go, as well as a licensing agreement that establish the FOX Sports Radio Network.
About Premier Boxing Champions
The Premier Boxing Champions series was created and is produced by Haymon Sports, LLC. It features the most accomplished and decorated array of international professional boxing talent across the most popular weight divisions.