FAILED OR FANTASTIC? THE OBAMA LEGACY: A “WE-WRITE” OF THE GREATEST AMERICAN PRESIDENCY

— To pre-empt an anticipated media whitewash and re-write of Obama’s historical impact, one author crowdfunds a people’s “we-write” of the 44th U.S. president’s achievements. — 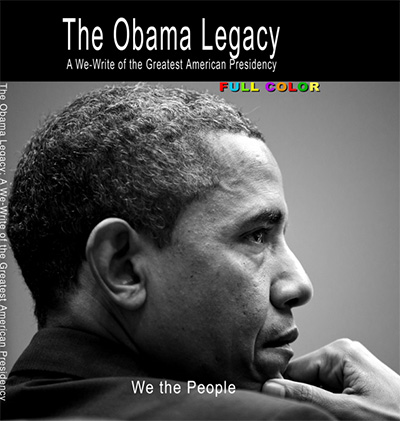 New York, NY (BlackNews.com) — Like many people who’ve engaged in conversation about the legacy of this nation’s first African-American president, Walt Goodridge has concerns that the US media won’t be fair or balanced when reporting or documenting the long-term historical significance and societal impact of Barack Obama’s eight years in office. Goodridge, however, took those concerns a bit further and did something about them by successfully crowdfunding and publishing a photo documentary entitled The Obama Legacy: A We-Write of the Greatest American Presidency.

“After eight years, much of what we feel or think we know about Obama’s presidency isn’t the result of an objective assessment of his accomplishments,” explains Goodridge, founder of the Obama Legacy We-Write Book Project. “It’s the result of media coverage that jumps from one new news story to the next, in a society that, historically, has fallen short when recognizing the humanity of men and women of color and expressing praise for their achievements. Internationally, Obama is respected as a great statesman – with poise, eloquence and intelligence unmatched in modern American politics. Domestically, however, his many successes have been overlooked or under-reported. Going forward, we can’t allow pundits, politicians or Hollywood producers to determine how we and our children remember President Obama. We need to take pre-emptive action to guide and direct the conversation around his legacy. That’s what this book is about.”

For those who claim disappointment with the Obama presidency, Goodridge makes the case that while previous presidents all had the power to do so–and despite obstructionism that began the night of his first election–Obama passed the first nationwide health care reform in U.S. history, made equal pay for women the law of the land, appointed multiple female Supreme Court justices, advocated for gay marriage and acceptance of gays in the military, and thawed U.S. relations with Japan and Cuba after decades of political distance. He oversaw the demise of Osama bin Laden, troop withdrawal in Iraq, voted against the Keystone pipeline and compassionately commuted or pardoned harsh sentences for 1,324 individuals — more than the 11 previous presidents combined.

Goodridge cites these and other Obama achievements as ‘real progress’ – legislation and actions that seek to remedy the effects of America’s foundation of white supremacy, its history of genocide, institutionalized racism, sexism, religious extremism, exploitative and environmentally destructive capitalism – which, despite the administration’s negatives (i.e. civilian drone strikes, increased deportations and corporate wrist slaps), stands as a hallmark of great leadership.

To heighten the book’s appeal to younger students of history, Goodridge includes easy-to-remember “legacy rhymes” throughout. Accompanying the caption of the iconic photo of Obama’s first official act, for instance, he writes: ‘The first act that Obama signed / Was January 29, 2009 / And now in Lilly’s name we say / With equal work comes equal pay.’ “Imagine your classroom of students reciting not only when ‘Columbus sailed the ocean blue,’ but also when the nation’s first black president signed the Lilly Ledbetter Fair Pay Act!” he opines.

According to Goodridge, “Of course, he wasn’t perfect — no president is — but we’ve witnessed a great one whose legacy will ultimately be recognized as unparalleled. But don’t expect to tune in to the six o’clock news to hear words with that appraisal anytime soon. We the people have to speak those words ourselves and to our children, out loud, starting now. The proof is in the public record, and in this book. Don’t wait for the media re-write, make this a history WE-write!”

Download a preview at www.obamalegacybook.com, where you can order the paperback or hardcover AND receive the bonus 70-page Obama Legacy Timeline supplement FREE. (Available separately on Amazon.com and BarnesandNoble.com)