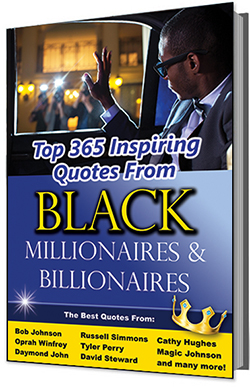 Nationwide (BlackNews.com) — Successful Black business owners have been saying a lot over the years, but perhaps we haven’t been listening. And so one new e-book reveals exactly what they’ve been saying!

Published by Urban Ebooks, its called Top 365 Inspiring Quotes From Black Millionaires and Billionaires (exclusively available for just $2.99 at www.urbanebooks.com), and its the first publication ever that features famous and inspiring business quotes solely from African American millionaires and billionaires. Readers can not only benefit from their priceless advice and wisdom, but also the valuable life lessons that they share.

According to federal statistics, African American business owners continue to increase in numbers but most have just 1-2 employees, and generate revenues of less than $50,000 a year. Even worse, 1 in every 5 Black-owned businesses fails within five years. It was those devastating statistics that became the motivation behind publishing and releasing Top 365 Inspiring Quotes From Black Millionaires and Billionaires.

Here are a few sample quotes from the book:

I got my start by giving myself a start. — Madame CJ Walker

“If you stay ready, you don’t have to get ready.” — Will Smith

Youre not in the music business unless you have a hit record. — Master P

The thing about using other people’s money is they’re going to set the rules. — Tyler Perry

“Doing the best at this moment puts you in the best place for the next moment.” — Oprah Winfrey

Great tool for both aspiring and existing entrepreneurs

The insight and knowledge from these successful African American business owners can be used to help readers so that they too can be successful in business, build their own empires, and create your own destinies. It’s a great book for both aspiring and existing entrepreneurs. All in all, the book features 365 different quotes. That’s one quote for every day of the year!

For more details and/or to purchase the book, visit www.urbanebooks.com