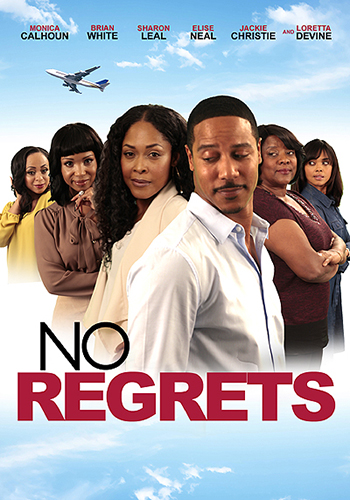 Los Angeles, CA (BlackNews.com) — A celebration of black history and romance, Urban Movie Channel (UMC) presents two new exclusive streaming premieres fitting for both Black History Month and Valentines Day. Kicking off on Friday, February 10, 2017 comes the new romantic comedy from director Mark Harris (Black Coffee), No Regrets. Starring Monica Calhoun (The Best Man) and Brian White (Scandal, Chicago Fire, Stomp the Yard), the film follows Nina Thomas, a flight attendant who after 12 years of dating her college sweetheart (and rejecting his many marriage proposals), finally says yes. But after meeting a handsome divorcee during a long layover in Los Angeles, Nina finds herself in a compromising position that she never thought shed be in. Instantly smitten, the two of them spend an entire day together where they both begin to discover what their mates truly mean to them and what they mean to each other.

Also starring Emmy Award-winning actress Loretta Devine (Waiting to Exhale, The Carmichael Show), Sharon Leal (Addicted, Dreamgirls, Why Did I Get Married?), Elise Neal (Hustle & Flow, All of Us), Caryn Ward-Ross (The Game), and Amin Joseph (Dope), No Regrets first premiered at the Urbanworld Film Festival in September 2016. Its premiere on UMC will mark the first time the film has been made available for wide release.

Premiering on Friday, February 17, 2017, Hatching Shakespeare follows Dr. Melanie Andrews, the successful stage director of the Inner City Shakespeare Ensemble in Los Angeles, California. When she begins working on a new production of The Taming of the Shrew, she and her troupe of young actors face many unexpected obstacles and setbacks. As the possibility of getting the show ready on time dwindles, the documentary follows Andrews and her team as they work to achieve their goal. The result is a surprising turn for all.

Also coming to UMC in February, Breaking a Monster chronicles the journey of three 7th graders from Brooklyn, New York who spend their weekends playing heavy metal/speed punk music in Times Square as the band Unlocking the Truth.” When the band’s Internet fame explodes and the music industry comes calling, Malcolm, Jarad and Alec feel like anything is possible but are soon confronted with the realities that come with being rockstars. In their first year, the band goes from three kids just playing the music they love, to the very adult world of touring, managers and a $1.8 million record contract  all in pursuit of living out their heavy metal dreams. Breaking a Monster first premiered at the 2015 SXSW festival and will be available on UMC beginning Friday, February 3, 2017. Available at www.urbanmoviechannel.com, UMC is the first premium subscription streaming service that showcases quality African American and urban entertainment across all genres from RLJ Entertainment (NASDAQ: RLJE).