TidalWave Comics is proud to announce the addition of Kamala Harris comic book to its popular “Female Force” series focused on female empowerment.  “Female Force: Kamala Harris” will be released on October 21st in time for her birthday. 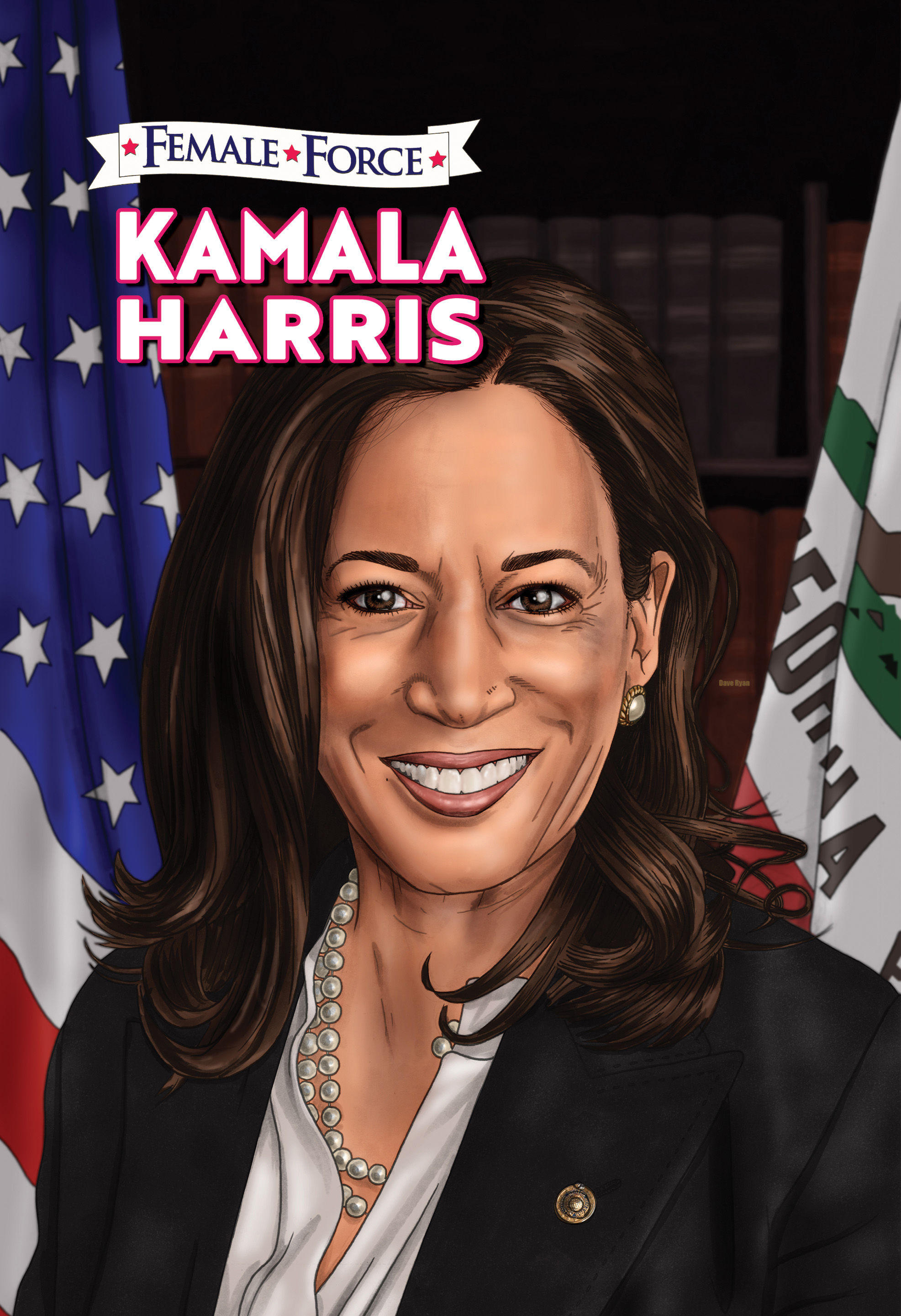 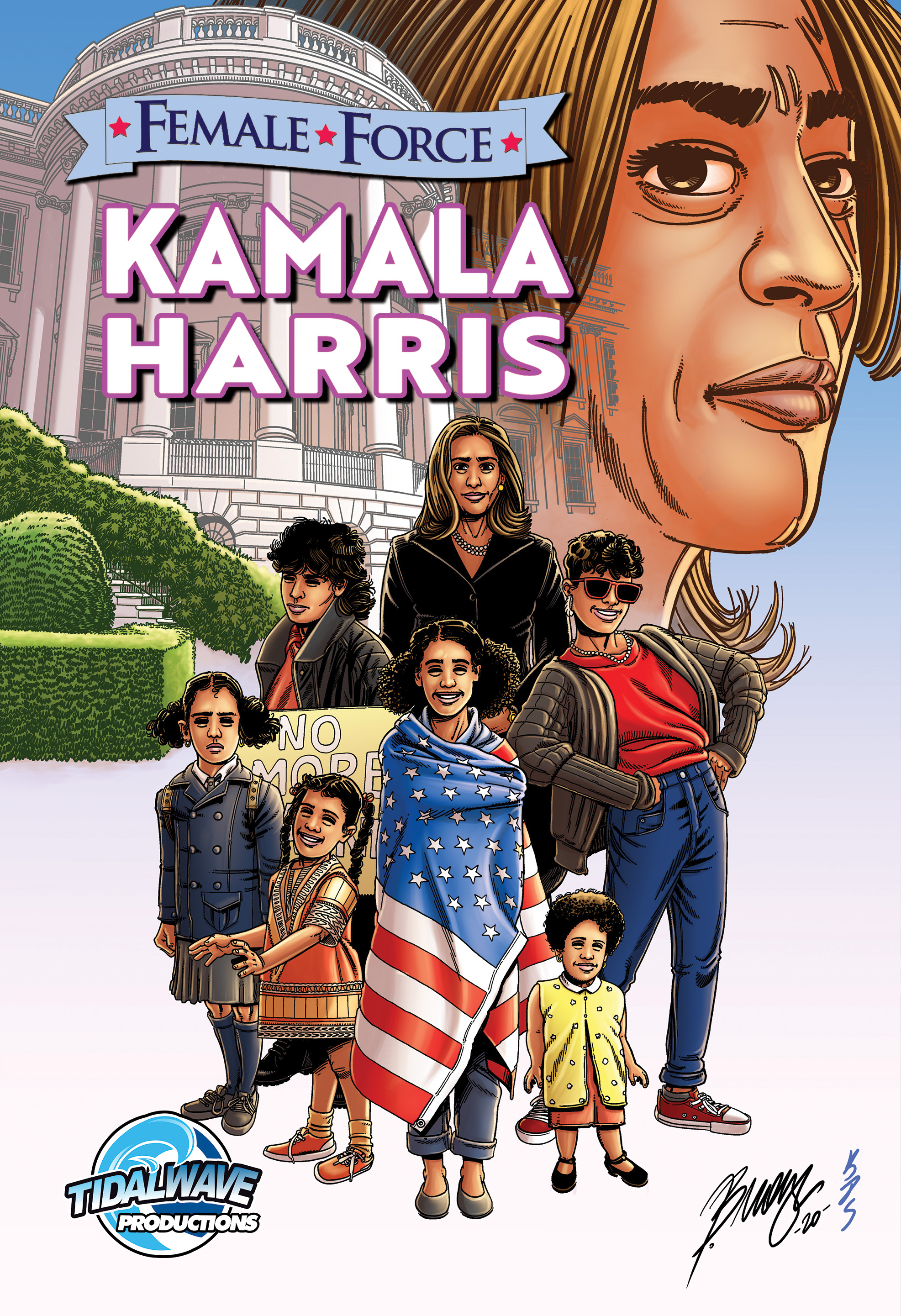 TidalWave has profiled politicians for more than 11 years using the unique storytelling properties of comic books.

Kamala Devi Harris is only the second African-American and first Asian-American Senator from the state of California. A lawyer, prosecutor, and former attorney general, Harris has devoted herself to bettering the lives of her constituents while focusing on social issues that help minorities and women. Full of grit and determination, her no-nonsense approach and bi-racial heritage have made her a popular member of the Democratic party. She is now presidential candidate Joe Biden’s running mate.

Written by Michael Frizell, drawn by Juan Burgos, this 22-page book is available both digitally and in print and can be found on multiple platforms.  Also special hardcover of the comic book will also be available with cover by famed comic book artist Dave Ryan.

“We believe that it is important for readers to have inspiring role models, to learn about extraordinary individuals that have overcome challenges to make a difference in the world. That was the thought process Darren G. Davis went through before creating the comic book series “Female Force.”

“We wanted to showcase the strong women in today’s society that have inspired generations and shaped the culture of today,” Davis said. “Kids and adults alike can look up to these women as great role models.  One of the coolest things about the comic books is that we found schools using them for reluctant readers.”

The latest biography comic book joins TidalWave’s ever-growing library of more than 200 comic book biographies. Previous titles have profiled Angelina Jolie, Hillary Clinton, Sonia Sotomayor, Michelle Obama, Ruth Bader Ginsburg, Condoleezza Rice, and Cher. These biographical comics, written by some of the most talented writers in the comic world and beyond, deliver an informed and illustrated look into the lives of these figures.

“I enjoyed working on this comic. As a public figure, Kamala Harris is a fascinating person. Her historic nomination is a natural progression of her talent as a politician. It will be fascinating to see what happens next. Love her or not, her placement on the ballot is groundbreaking,” said writer Michael Frizell.

“The Kamala Harris comic book helps readers in their connection to the main character on a personal level that the news, for its nature, set distance. Due to that, the goal of this project is to tell people details that most of them previously knew but couldn’t feel related to their lives.” Said artist Juan Burgos.

The biography comic format allows TidalWave writers to delve into the history of newsworthy figures and explore what shaped them. Several media outlets, including CNN, FOX News, “The Today Show” and Time and People magazines, have featured the company’s line of biographical comic books.

Print copies of the biography comics are available on Amazon. Digital versions are available from iTunes, Kindle, Nook, ComiXology, Kobo and wherever e-books are sold.

Comic book and book stores can order this book thru Ingram.

For more information about the company, visit www.tidalwavecomics.com

TidalWave is a multifaceted multimedia production company with the mission of delivering dynamic storytelling in a variety of forms by developing graphic and literary fiction and nonfiction, audio, film and more. The company’s wide range of diverse titles delight readers through its creative and innovative storytelling available in high-quality print and electronic formats.

TidalWave delivers a multimedia experience unparalleled in the burgeoning graphic fiction and nonfiction marketplace. Dynamic storytelling, coupled with groundbreaking art, delivers an experience like no other. Stories are told through multiple platforms and genres, gracing the pages of graphic novels, novelizations, engaging audio dramas and cutting-edge film projects. Diversity defines TidalWave’s offerings in the burgeoning pop-culture marketplace through its use of fresh voices and innovative storytellers.

As one of the top independent publishers of comic books and graphic novels, TidalWave unites cutting-edge art and engaging stories produced by the publishing industry’s most exciting artists and writers. Its extensive catalog of comic book titles includes the bestsellers “10th Muse” and “The Legend of Isis,” complemented by a line of young adult books and audiobooks.

“The Comic Book Every Child Should Own.” — BuzzFeed

“It’s great that they are doing these comics.” — CNN

“[TidalWave books] engage a growing readership and bridge the gap between comic books and the diverse multimedia marketplace.” — Vanity Fair