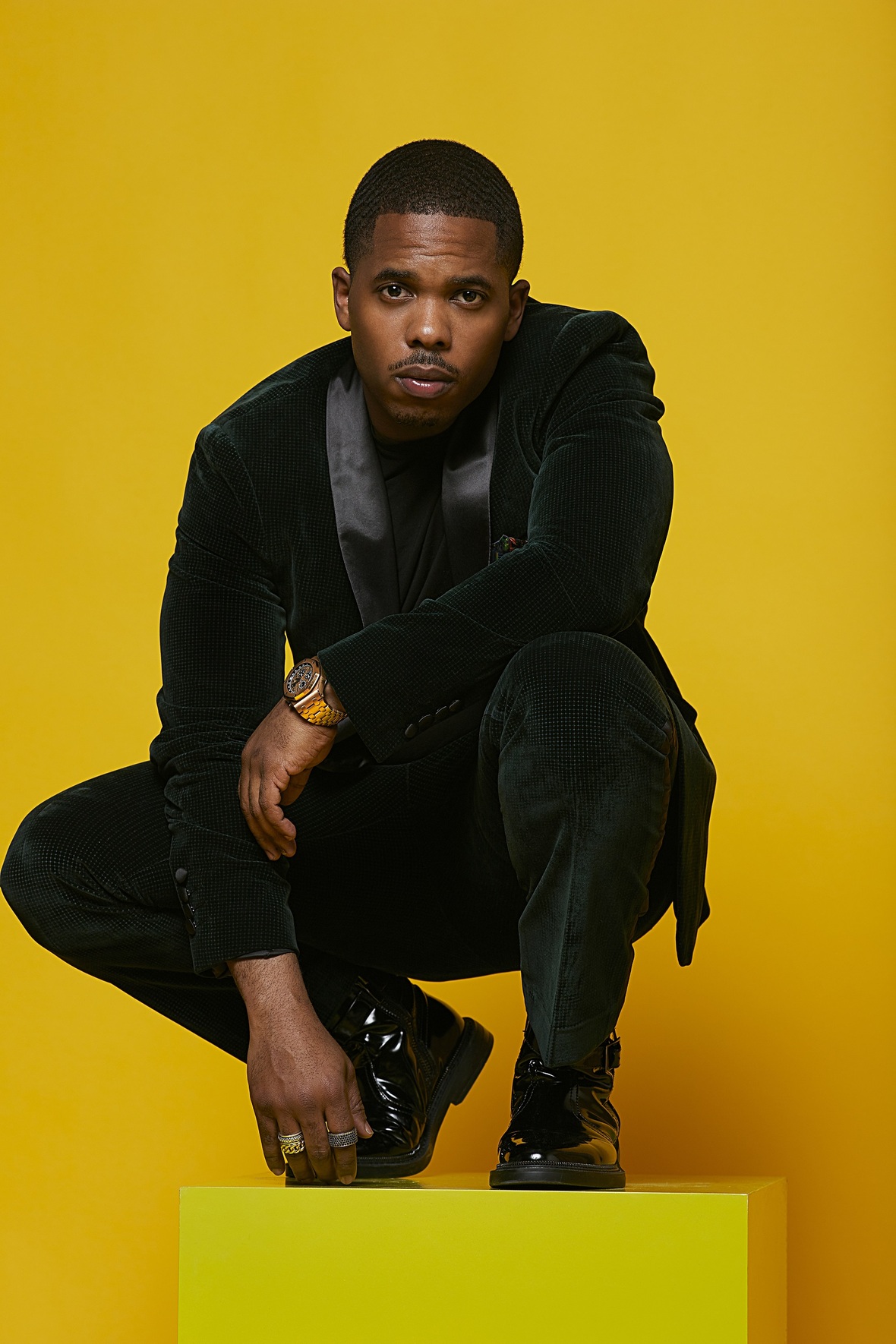 “I am very proud of the outcome of the music video as I love the rawness with a hint of throwback that the video portrays. It was all about the love and chemistry and not so much about the bells and whistles of a music video,” says J. Brown. The visuals were brought to life by video director TalkEye and shot in Los Angeles. “Sunrise Sunset” has just been added to BETsoul and BETher.

“Words can’t describe the feeling I am feeling about having my song be the Top 10 R&B song in the country this week, mentions Brown. “It’s been a long road filled with lots of hard work, but it’s slowly but surely paying off and there is no greater feeling that going from city to city and people are singing your song or even playing it on the radio over and over…I am just thankful, he adds.

ABOUT J. BROWN
Figuratively set to the rhythmic pace of its infamous, steady-grinding automobile factories, while its streets are legendary and well-known the world over for the hyper-creative and musically fertile atmosphere that gave birth to Motown, Detroit continues to be a music capital of feel-good, contemporary music that ultimately proves timeless. The list of iconic names that have catapulted and captivated from the Motor City seems infinite…more than a few simply known by one name. Typifying the old saying “something in the water,” singer/songwriter J. BROWN – though generationally removed from the Gordy company’s then revolutionary melding of contemporary R&B and pop – has paid his dues and persevered in bringing those time proven musical values into the new music era with his forthcoming, long-in-the-making solo debut set. With music firmly in his blood and armed with tunnel-vision focus on following his passion of making music from the heart, J. BROWN delivers a dose of straight-up R&B – some with subtle pop and 90s throwback influences – to a music generation largely devoid of truly soulful and impassioned music.

Consequently, the recent breakthrough of J’s sunny-vibed, easy-bumpin’ “Sunrise Sunset” on Billboard’s Adult R&B chart is the culmination of years spent honing his craft and holding true to his dream of bringing back passionate music. The youngest of five children born to a preacher and musically ambitious mother, J’s life-long musical journey predictably began in the church when a mere eight-year old’s musical interests were unleashed by singing with the choir every Sunday morning. Though his personal music influences as a youngster included the likes of Usher, Jay-Z, Jimi Hendrix, Nas and Sting, it turns out the only direct Motown connection comes through his initial musical inspiration, his Mom. “She was initially signed to Motown back in the day,” J explains; “she and my aunt had a situation with Motown. Smokey Robinson actually signed them, and then my Mom got pregnant with my older brother. That pretty much finished that deal. So it all pretty much started for me with my Mom, with all of her experiences and what she did as far as pursuing her dream inspired me.” While exposed to the classical music his Mom regularly played at home, grade school found young J nurturing his acting and vocal skills in a local theater group, which afforded him the opportunity to sing the national anthem at Pistons and Lions games, as well as perform for then President Clinton multiple times.

After continuing that momentum into high school, which resulted in numerous talent show wins, J and best friend Robert Curry (later of Puffy’s Making The Band 4 group, Day 26) were approached by a mutual acquaintance who informed them that Fugees founder, songwriter/musician/producer Wyclef Jean was looking to sign a group. With Curry and two other singers hastily forming the group E2G, they drove to New Jersey, auditioned for Wyclef and were signed right away to Clef Records/J Records. However there was one minor glitch. “Wyclef said, ‘How is this going to work if John is in high school?’” recounts J (the others having either dropped out or graduating later). “So I said, ‘Well, if I can transfer then I will certainly do so.’ So, I just transferred from my high school in Detroit to Jersey. It wasn’t a move done with my parents, so we just stayed in one of Wyclef’s houses. He had this huge home that we stayed in. During that time he gave us an allowance every week, and it worked out. I just walked with faith and hoped for the best.”

Nevertheless, after a year of recording and prepping for their debut, the quartet realized Wyclef’s vision for the group wasn’t what they had in mind and ultimately disbanded. “It was definitely a friendly split though,” J recalls. “Eventually, ‘Clef asked me if I wanted to stay and pursue a solo project and I said, ‘You know what? I’d rather just go and pursue college at this point. I’m still cool with him; it’s just that some people weren’t really prepared to be in that situation and it obviously showed throughout the years.” With that, J proceeded onto a full academic scholarship at Grambling State University, spending the subsequent four years recording, performing and frequently transferring schools. Though a brief deal with Universal Republic Records resulted in the 2010 singles “I’mma Love You Right” and “Sex On My Money” (featuring Gucci Mane), J found himself back in Detroit working hard…but with music temporarily on the back-burner. Shortly after taking a chance by placing an ad for management and producers on Facebook, J cautiously replied to someone who claimed to know people who could help him. Following his gut instinct proved fruitful, as his very own Mocha Music production company is currently putting the final touches on his long-awaited, full-fledged solo debut set.

Beyond the laidback, feel-good vibe of “Sunrise Sunset,” music listeners are set to discover J. BROWN’s silky-smooth, old school-reminiscent vocals amidst a refreshingly clean, straight-up R&B sound with touches of pop, hip-hop and rock. “The majority of the songs definitely fall into the straight-up R&B feel,” he says of his forthcoming debut. “Some things have a little pop influence, but the majority of it is straight R&B with that old-school feel. You might think of Babyface, Mint Condition, Bell Biv Devoe, New Edition, Jon B or maybe a little Jaheim when you hear it. I just hear a combination of so many different artists when I go back and listen to my music. I don’t have to use Auto-Tune on a record; I can sing on the spot without any technology just like the old cats did. Capturing that “old school feel” and bringing it back was actually my objective.”

Thus far, a preview of material on his JBrownMusicOnly.com site reveals that crystal-clear and soulfully expressive voice with impressive range effectively showcased amidst feel-good songs centered around love that can be listened to for years to come. Whether it’s his acoustic guitar-laced “50 On It” luring your ears with its warm ‘n sensual vibe; the dreamy, pop boy band-esque midtempo flow of “Fall Apart” or the late-night, lo-fi/urban beat balladry of “Letting Go,” J. BROWN aims to lure a massive faithful following with songs that will prove to stand the test of time. “I want to bring back that ‘feel-good music’ that everybody who wants love listens to,” he proclaims of his musical intentions. “I want to bring back something that will ultimately cause people to fall back in love. I want to take people back to where we once used to be in terms of music…that real love music…that kind of music that ultimately results in people having babies…that long-term type of music and that long-term love relationship type of music that makes people want to stay with their significant others. Nowadays we’re hearing that ‘hit-it-and-quit-it” type of music verses music of substance. We need more music with a moral foundation…and that’s what I want to put out there. I want people to say, ‘This guy has music that is not only good music, but music that will last throughout the years.’ Let’s get back to the real love and the music that really matters and means something.” Listeners will soon find his mission accomplished.